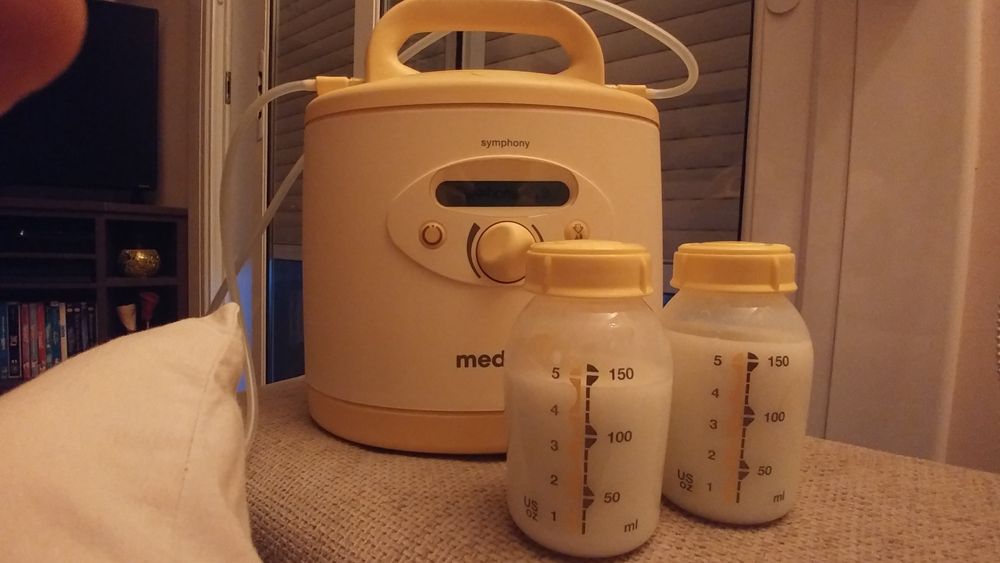 “Before becoming pregnant I had already been reading about breastfeeding, but I had read little about offering expressed breast milk until we were told that we were going to be parents of two babies. Researching about tandem breastfeeding, I began to see things about pumped breast milk, especially to give a little break to the mother with two babies. At that time I didn’t completely rule out this possibility, but I did continue to be in the lead in doing exclusive breastfeeding for both my babies.

But life had a surprise in store for us: the premature birth of our children at 29 weeks. It was then that we found ourselves facing a breast pump and the need for exclusive pumping.

The babies were admitted to the NICU and both pediatricians and nurses told us that breast milk for our children was the best medicine. Four hours after giving birth I started pumping, aware at the time that we would be stuck in the machine for a long time, but at the same time hoping that as our children grew older we could return to the idea of breastfeeding directly.

Three days after giving birth we managed to have a super-production of milk, enough to feed the two babies and start our own particular milk bank.

I was able to put them on my breast for the first time. It was an incredible moment that I had dreamed about for a long time, but soon we saw that it wasn’t going to be easy.

In the neonatal unit the milliliters of milk are counted and measured in the same way as the grams that babies gain, and at that time, the stability of the babies, the amount of food we could control their intake, and the grams of weight were more vital than the “live breastfeeding”.

So for a few weeks we offered empty breasts while the babies were drinking my milk through the catheter so that they could associate concepts.

The boy seemed to be moderately controlled, but the girl was not able to breastfeed. They told us to give them time, that they were very small and as soon as they finished maturing a little bit more everything would be easier.

That’s how we stayed until we were discharged, 10 days before the due date, and that was the date we set to get serious about live breastfeeding. We understood that by then the babies would have reached maturity equivalent to term babies and that from then on we would have some chance of establishing “normal” breastfeeding.

We contacted a lactation consultant who was coming home. We checked that there were no tongue-tie or other barriers, that the latch and posture were correct.

Immediately the boy understood the functioning of the breast, but the girl did not get it. We tried nipple shields, Supplementary Nursing Systems, different postures and even visits the osteopath, but she couldn’t breastfeed. I guess the almost two months with the nasogastric tube and nipples and bottles dizziness in the neonatal unit didn’t help much.

After several weeks without success we decided that the boy would be directly breastfed and the girl would have my milk in a bottle, but the time the boy was spending on the breast were getting longer and the girl was demanding her food ration. In the moments that I was accompanied there was no problem, another person gave the bottle to the girl and I could be calm offering the breast to the boy, but I spent many hours alone and the situation became unsustainable. Neither the boy was breastfeeding as he deserved, nor was the girl cared for as she should have. All in all, none of us were well. They because they did not receive the right attention and I because I created anxiety and discomfort the constant feeling of not coming to anything. Not being able to breastfeed the baby calmly, not being able to give the baby a bottle in my arms, not being able to pump my milk for the next time without hurrying, in short, I had the feeling of running all the time to do things quickly and badly.

At that moment we made the decision to express breast milk for both babies, until they were at least 6 months old.

At home we had a hospital extractor that we rented 3 days after the babies were born and it helped us a lot in the production of milk. I had enough milk for both of them and we could add doses to our milk bank. We had the freezer of my parents’ house full (three drawers) and the freezer of our house full of bags full of that liquid gold.

The production remained good almost all the time, we had some production drop that we solved with a little pharmacological help and that helped us to have enough milk for the two babies.

Until they were 6 months old I still had the hope of getting a live lactation, but when I saw that we couldn’t get it, it started to go uphill the times hooked to the breast pump, but seeing that the milk we offered them was doing so well helped us to keep constant.

At 11 months I decided to stop breastfeeding the little ones. Complementary feeding was established and each time they drank less milk, so we decided that it was the moment.

I admit it was a meditated decision, but just as it happens to many mothers when they wean, I spent my mourning. It was hard for me to see the can of formula prepared in the closet for when I needed it.

It took us a month to get the production down. It was like my body didn’t want to stop feeding my children. And after I stopped pumping my milk they still took milk from the milk stash we had been creating all this time.

My children breastfed very little from my breast, but we can proudly say that they fed on my milk for almost a year. That’s the best gift we can give them after the fighters they had been.”