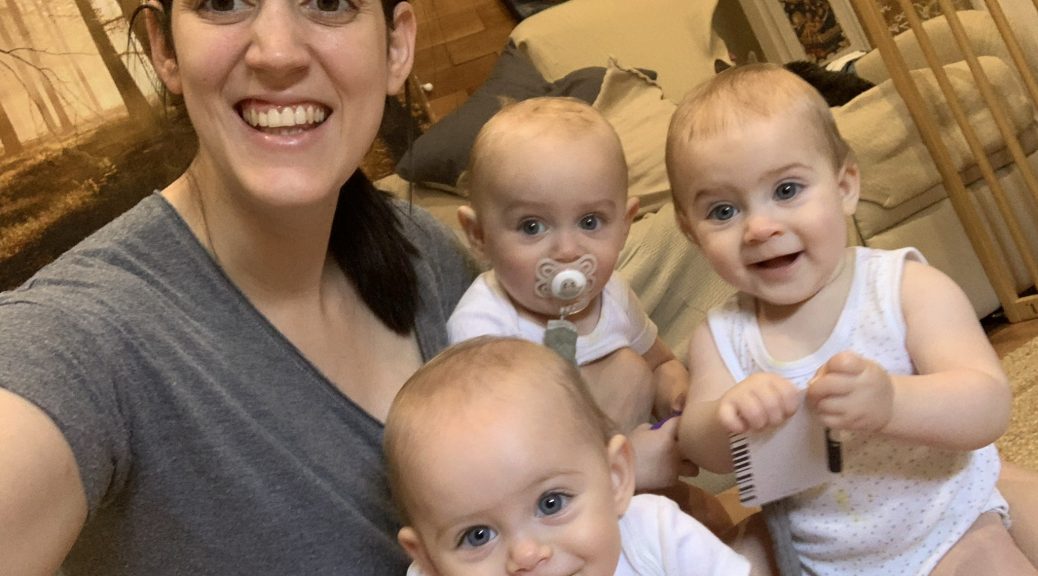 Breastfeeding one single baby can be complicated, but how is breastfeeding triplets? We have been lucky enough to hear the first hand experience of our user Laia, who has shared her story with us. Thank you, Laia!

“I planned to breastfeed the triplets, just as I did with my older son. In addition, I knew that because they were premature, breastfeeding was a great help for them. In fact, our breastfeeding journey started in the NICU.

The first drops of colostrum were hand expressed in the NICU by a nurse, Andrea. Surprisingly, she expressed considerably more than expected. I was lucky, as during both my first and second pregnancies, I had colostrum from almost half of my pregnancy.

That first day, after reaching the ward, I expressed colostrum and encouraged milk supply with the breast pump every two or three hours. We pumped several syringes that went to Laia, the baby that was born with the lowest birth weight.

That first night my production decreased and I only managed to pump a few drops. I didn’t see my babies until the next day in the afternoon. I tried to breastfeed all three of them, but only Laia latched on well, and even then she needed to be supplemented at that feed because I nearly didn’t have anything. It continued like that for two days, with only a few drops coming. But I didn’t stop pumping. And when I went to see them in their incubators, I put them to my breast.

The day I was discharged, the third day after the birth, I was already pumping a lot more milk. Enough, so that Laia, who was the only one who stayed in the hospital, didn’t need any other milk.

Pol and Alícia, who came home, were exclusively breastfed. However, some nights, especially the first week, it was almost impossible to wake up Alícia at night, so we gave her a bottle with my expressed milk. I used to pump at least once a day so that Laia, who was still in the hospital, would have milk. And so that Pol and Alícia could have expressed breastmilk if they needed to be supplemented.

It was pretty tough! After three days I started having breast engorgement. I had lumps of breastmilk in my armpits and it was also coming out of several points of the areola. I contacted Lourdes (my midwife and IBCLC), who was an absolute star for me. She helped me to solve all these problems and gave me many suggestions to make everything easier.

I was trying to relieve myself with the breast pump. I remember pumping about twice a day. During the day and at night, Pol and Alícia exclusively breastfed. And Laia would breastfeed when I went to see her, while the rest of the day, she would be fed with my expressed breastmilk in a bottle.

Laia was discharged 12 days after birth with 1,900 grams.

It seemed that my breasts started to adjust. I fed them on demand: when they woke up, I put them onto the breast. Sometimes two at a time, sometimes on their own. If all three asked, one waited. I never let more than three hours pass without feeding. Since they were premature (born at 35 weeks and 3 days), being on top of their weight was very important.

A month after they were born, I became a breastmilk donor. I had a lot of extra milk, and I knew all I pumped was going to be left over. I used to pump in the mornings when they were still sleeping.

I became an expert at pumping. I had already done it with my eldest, and so with them, I bought the wireless pump, which helped me a lot! [Laia used the Elvie wireless breast pump].

Breastfeeding went much smoother from that month on. They were already latching on better and feeding faster. For practical issues, I never let them fall asleep at the breast. When they were in the incubators, they were already introduced to teats and pacifiers (without asking), so with the help of a dummy/pacifier, they fell asleep on their own or by moving the crib or the baby bed.

Approximately at 3 to 4 months, we had the first “breastfeeding crisis” (I didn’t even notice the others and none with my oldest). The thing is that then they got upset at the breast because the milk took longer to come out, especially the one who had to eat in the third place. Because of her character, I started to put Laia always last: she had more patience to wait and to get her milk out.

At 4 months, two months after becoming a breastmilk donor, I had to stop donating. I was going to start working when they were 6 and a half months old and I needed to freeze breastmilk for them.

I started working when they were just 6 and a half months old. On the recommendation of our paediatrician, we continued to exclusively breastfeed and didn’t start solid food until later.

I pumped about 5 times a day. There were days when I managed to pump 1.2 litres, although I usually pumped around 1 litre. I pumped in the morning at home, three times at work, on the way home and once more when they were asleep at night. And in the evenings, when I picked them up, they had an ‘open tap’, just like during the nights.

At the childcare centre, they would feed a bottle each, three times a day. My supply started to reduce. So after about another month, they needed to be supplemented with my frozen milk. They were having larger bottle feeds at the time.

At 8 months we started to introduce solids (they were exclusively breastfeeding up to this point). Although they were still taking a bottle of my breastmilk and feeding at the breast when they were with me. At 9 and a half months, we introduced the first bottle of non-breastmilk (after the ones they were given during their first 2 to 3 days in the hospital) and they ate normally. Sometimes they needed additional milk and sometimes they did not, depending on how hungry they were that day.

I went from pumping 5 times to ‘only’ 3. And so it went on until after our holidays when I started to pump 2 times when they were almost 12 months old.

On the 1st of September, they went back to the childcare centre and didn’t want to have a bottle anymore. They tried there for several days, but they only wanted to eat solids and waited for me to come home to breastfeed. Occasionally, on Saturdays (when I work) my husband did give them a bottle. And so it was until a few weeks ago when they turned 13 months old.

Until now, I used the milk I have been pumping to give them with oatmeal in the mornings, but now I am trying not to pump anymore, because we have already introduced cow’s milk and with almost 14 months they are still breastfeeding, all 3 of them. Now they usually have two feeds in the evening/night, one or two in the early morning and one in the morning.

We’ll see for how long. So far we’re doing great, even if every now and then I get the occasional bite.”