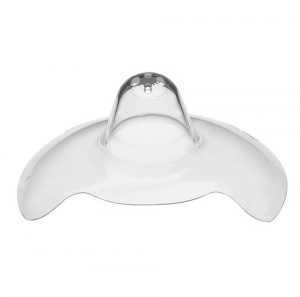 A few years ago, nipple shields were kind of like the devil. The rule was “take out the nipple shields”, and we encouraged all mothers to remove them as soon as possible.

The oldest nipple shields were made of materials as varied as glass, silver or ivory. Nipple shields from the 70s and 80s were partially made of latex or rigid rubber, hard and very bulky. Similar to the teat of the bottle. Both because of their rigidity and their shape, babies could not suck them properly and, of course, the stimulation carried out on the breast, which is basic for regulating milk production, was not optimal. All this caused a drop in production.

What about today’s nipple shields?

Today’s nipple shields are made of thin and very soft silicone. This type of nipple shield fits over the breast and, if the baby is held properly, does not interfere with milk production.

Are they all the same?

When is the use of nipple shields recommended?

In the past, it was recommended to use nipple shields in any case and/or situation, but we must be aware that, like any breastfeeding device, its use must be restricted to the situations in which it is necessary:

And how are they placed?

The nipple shields are not left on the nipple and areola, it is necessary to evert the wings so that the nipple shield makes the vacuum and grabs the nipple. If they are incorrectly positioned, the baby can move them at any moment, which produces a constant and exhausting struggle.

Does the baby latch on the same way as she does to the breast?

Yes, the baby should latch on the same way he does without a nipple shield:

So If an optimal grip is not achieved, the baby will not get a good milk transfer and, in addition, trying to press on the cap can cause injury to the nipple.*

What if I want to take them out?

Many mothers get tired of nipple shields and having to use them every time the baby breastfeeds; that’s why they consider removing them.

If she gets angry, we put them back immediately. Little by little and with time she will get used to suckling directly.

In any case, babies often leave nipple shields on their own around 3-4 months. The day comes when they themselves reject them, and you can start breastfeeding without nipple shields. But if the baby doesn’t want to know anything about eliminating them, it is possible that he or she has to continue with them during the whole lactation and if the mother accepts it, there is no problem either in the production of milk or in the duration of the lactation.

*In the case of cracks caused by a bad latch, if the baby does not latch on optimally to nipple shields either, it is possible that they do not reduce or avoid pain but rather increase it.

To find out more about all things breastfeeding or if you have any other questions about breastfeeding, download our free App, Lactapp for Android or iPhone.

One thought on “Everything you need to know about nipple shields”